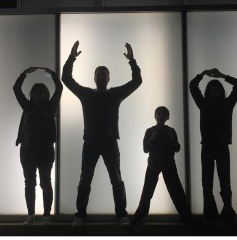 G is for Genetics

I get asked often what I think caused my child’s Autism.  I believe it is completely counterproductive to even consider it until such a time that there is solid evidence.  They are here now. I love my kids fiercely. Our struggles would be the same whether or not we knew the ‘why’ part.

Infection in mother during pregnancy, vaccine accidents,  overweight in mother during pregnancy, gestational diabetes, inadequate iodine, diagnostic ultrasounds, prenatal stress, advanced paternal age at time of conception, pesticides both before and after gestation…I’ve read those all.  And they all have the same message:  “Dad….Mom (but more likely Mom)…you did something…IT’S YOUR FAULT.”   These theories are also part of what drives the Neurodiversity movement.  That is, that individual differences and biological diversity are a normal and natural part of evolution and Autism is no different, so it is not something to be treated. Behavioral disruption is misunderstood communication and all the comorbid conditions such as GI/bowel issues, intellectual impairments, mental health issues are just that. Something not related directly to Autism (a whole other can of worms within our community….).

Regardless of your belief system…there is only one thing we know for absolutely certain: NO ONE KNOWS WHAT CAUSES AUTISM.

To demonize parents who make decisions you would not necessarily make is also counterproductive.

As parents we have an instinct to protect our children. When a parent watches the baby she knows slip away into a world of of silence or pain in front of her very eyes and no one can tell her why or really what to do..well….just take a moment to let that sink in regardless of your parenting/political/medical stance. I don’t have to agree, I just have to have empathy.

Here is what we do know.  There is a genetic component to Autism and it is likely paired with an environmental trigger.  Just like Type 2 Diabetes. You can’t develop this unless you have the genes.  You make it far less likely to get it if you get your butt up off the couch, exercise regularly and do not eat like a regular American.

We just are not 100% certain what that common genetic component or the environmental one in Autism.  I am not going to even pretend to know anything about genetics. The best I can do is tell you:

That is what it is like trying to figure out the common genetic factor and environmental trigger together. When I had a discussion about this with a pediatrician 12 years ago she said to me: “Autism is caused by a genetics. Period.  To consider anything else is ridiculous.”

I sat for a moment and thought about that.  I then I wondered out loud, “Can you tell me another genetic epidemic in history that unfolded like Autism?” Crickets. I’m a pretty moderate parent…however it is no wonder that many parents are suspect of the medical system with that kind of definitive statement when the bottom line is WE DON’T KNOW.

Does it mean my husband and I have Autism? No, not necessarily…but who knows?  If we do carry that genetic material and we combined it….we no more caused the autism than we “caused” their big gorgeous brown eyes or fact that they may need to wear glasses one day. Their eyes could have almost just as easily been blue instead all things considered.   And if environment did play a role and all the Fruity Pebbles I ate during pregnancy kicked those  genes into overdrive as the environmental trigger, there is not a damn thing I can do about that now.

I have never felt the “shame of blame”…and I don’t think any parent should.

We are wired to procreate and continue population.  We can just hope that this kind of information will one day find the link that allows children who suffer in silence or physical or emotional pain to grow to be independent and happy…just like all parents want their kids to do.

One thought on “Autism Awareness Month. G is for Genetics (and Guessing)”